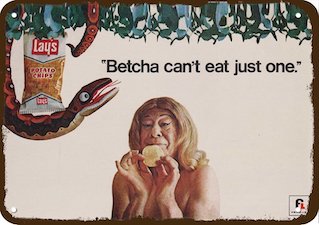 In the 1960’s the Frito-Lay company introduced it’s famous slogan, “Betcha can’t eat just one!” They popularized it by a very successful advertisement campaign both in print and on television.

We all have experienced it. We eat one potato chip and it tastes so good that we crave another one. This often leads to many more chips being consumed. There’s something about the fat and the seasonings on the chip lead us to crave more and more. Even when we aren’t hungry, once tasted, the chips can seem irresistible. It’s called “hedonic hyperphagia,” eating for pleasure.

The same is often true with sin. Rare is the time that we only commit one sin. Sin will often lead to more sin, either because we desire the pleasure or because we are forced to deal with the consequences.

This was the case with Adam and Eve. She sinned by eating the forbidden fruit. She further sinned by enticing her husband. They both sinned by trying to hide their sin from God. You can read about it in Genesis 3.

This was the case with king David. He sinned with Bathsheba. It didn’t stop there. It continued on with his cover-up plan. When Uriah didn’t go along with the plan, he ended up having him killed in battle. Then, more and more deceit as David refused to acknowledge his sin. You can read all about it in 2 Samuel 11-12.

The solution is to be aware of this tendency of our hearts and confess our sin quickly. David explained his trouble. “When I kept silent, my bones wasted away through my groaning all day long” (Psalm 32:3). But when he confessed his sin to the Lord (Psalm 32:5), he found great blessing (Psalm 32:1-2). 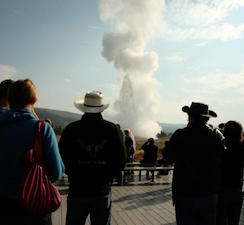 If you have seen Old Faithful erupt, you have also seen the many spectators who have gathered with their cameras engaged to catch this special event. There is something about this regular event that pulls in hundreds of spectators several times a day to watch.

The faithfulness of God is every bit as spectacular to watch. Jeremiah wrote,

“The steadfast love of the Lord never ceases;
his mercies never come to an end;
they are new every morning;
great is your faithfulness” (Lamentations 3:22-23).

When God makes a promise, he keeps it until the end. He made a covenant with Abraham to bless him and his offspring (Genesis 12:1-3). He repeated it to Isaac and Jacob (Genesis 26:4; 28:13). He remembered it 400 years later when he saw the persecution of the people of Israel (Exodus 2:24).

His promise was ultimately fulfilled in Jesus, who brought the blessing of God to the Gentiles. Paul told us that “it is those of faith who are the sons of Abraham” (Galatians 3:7). This promise has remained true for thousands of years. It is worthy of watching. 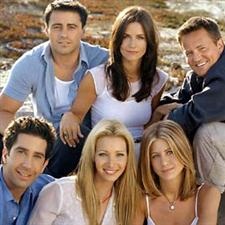 While in Nepal recently, I spoke with a pastor who was reflecting upon the state of marriages in the church. He said, “American media has done much to help our Christian marriages.” Such a statement may cause some of you to be aghast. How can that be? If anything, American media is out to undo the family and marriages. In great measure the roles played on television and in the movies is toward sinful living and risque behavior. How has it done much to help marriage?

The answer to this question comes in the core of marriage in a Hindu culture. When a man and a woman are married, the woman confesses that her husband is her god. She must serve him and worship him. This allows the husbands to trounce their wives.  In Hindu lands wives become their husband’s slave. They cook. They clean. They carry the heavy loads. They care for the children. The man is out doing whatever he pleases. The curse of Genesis 3:16 is fully realized, “Your desire will be against your husband, and he shall rule over you” (ESV marginal reading).

But, in American media, the equality of the sexes come through. It is written into our Declaration of Independence, “We hold these truths to be self-evident, that all men (and women) are created equal.” Now, we don’t always live that out (the racial tensions in our country are indicative of this). But, it’s what we say we believe. And, it is deeply rooted in American culture and deeply rooted in the Bible.  Peter says that wives are “fellow heirs of the grace of life” (1 Peter 3:7). That’s not to eliminate role distinctions in marriage, which are clear in the Bible. But, it is to eliminate all demeaning of wives. Thus, when Christians in a Hindu culture see this, they begin to see how reasonable and helpful it is to elevate that status of a wife.

Yet, this same pastor told me that “American media has done much to bring sexual immorality into our country.” As American media carries its way into a culture, immorality increases. When you tie this with the fact that American has made abortion free in Nepal due to our president’s wishes, sex is free and without consequences (or so they think). In the end this will surely do much harm.

Such is the tale being told about American media that is exported to other countries.

Sand castles are beautiful things. They take our minds away to faraway places with ideals of princes and dragons and lords and battles. To make sandcastles well, they take a lot of sand a lot of water and a lot of patience and a lot of talent.

But, we all know that every sandcastle, no matter how intricate and beautiful, will eventually find itself beaten down by the wind and the rain and will soon be a pile of sand again, some of it being swept back into the sea.

The Bible says that we are like sandcastles. We too are wasting away. The older you get, the more pains you will have and the slower you will move. Eventually, you will return to the earth. God said, “You are dust, and to dust you shall return” (Genesis 3:19).

Yet, for believers in Christ, we have reason not to lose heart at this reality of life, because God is working inside of us to produce something that will last for eternity. Paul explains, “Therefore we do not lose heart, but though our outer man is decaying, yet our inner man is being renewed day by day” (2 Corinthians 4:16).

Genesis 38 tells the story of Judah’s sinful behavior toward Tamar, his daughter in law. After the death of Tamar’s husband, Judah promised to give her his son, Shelah, when he came of age. Yet, Judah’s promise fell by the wayside. Eventually, Tamar disguised herself as a prostitute and solicited Judah to lie with her. When she became pregnant, Judah was outraged at her. Only later did he discover that he was the father of the children. What a mess!

Contrast this with Joseph. He was taken captive as a slave to Egypt. He was serving in Potiphar’s house as a slave. Potiphar’s wife sought to seduce him on multiple occasions, but Joseph always refused. One day, she was coming on to him so strongly, that he ran in haste, leaving Potiphar clutching his garment in his hand. Potiphar’s wife twisted the story and Joseph was spent to many years in prison.

Joseph was righteous and Judah was not. Is Genesis 38 written to demonstrate the moral difference between Joseph and his brothers?

One of the things that I constantly encounter as a pastor is the pain of divorce. It hurts former husbands. It hurts former wives. It hurts the children of the union. Why does it hurt so badly? Certainly there are many reasons, some of which are unique to the circumstances surrounding each particular divorce. But, here’s one reason.

Regarding marriage, the Bible says, “For this reason, a man shall leave his father and his mother, and be joined to his wife; and they shall become one flesh” (Genesis 2:24). This means that when a divorce takes place, you are ripping flesh apart. Imagine someone taking hold of the skin on your forearm, and then slowly pulling it back slowly. Such is the pain of divorce. No wonder it hurts so badly.

One of the most difficult portions of Scripture to understand is Jephthah’s vow, found in Judges 11. Israel was in danger of the Ammonites attacking. So, Jephthah vowed to the LORD, “If You will indeed give the sons of Ammon into my hand, then it shall be that whatever comes out of the doors of my house to meet me when I return in peace from the sons of Ammon, it shall be the LORD’s, and I will offer it up as a burnt offering” (Judges 11:30-31). It was an earnest plea to the LORD for help in battle. The tragic consequences came when Jephthah was victorious and his daughter was the first to come and greet him. There is much debate about what took place next, as the Biblical language isn’t so clear. But, I believe that Jephthah sacrificed his daughter (which is in total harmony with all of the bizarre things that take place during the days of the judges).

I have heard much about Jephthah’s vow, but I have never heard anything about Jacob’s vow. It was equally as foolish. After serving Laban for 14 years and facing his deceitful treatment, Jacob decided to leave with all of his wives (two of which were Laban’s daughters) and children. When Laban found out about it, he pursued the caravan, overtaking it seven days later. Among other things, Laban accused Jacob of stealing his gods. Jacob protested at this accusation and foolishly vowed, “The one with whom you find your gods shall not live” (Genesis 31:32).

Unknown to Jacob, Rachel (his favorite wife), had stolen the gods. It was only God’s grace that prevented Laban from finding these gods as he searched through all of their belongings. But, had Laban found them, I’m sure that we would have heard much about Jacob’s tragic vow.

Often you hear the question, “Which came first, the chicken or the egg?” For Evolutionists, the answer is much debated, because they don’t really know. But, for Bible-believing people, the answer is quite simple: the chicken came first. God created the fish and birds on the fifth day of creation. See Genesis 1.

But, today I want to ask you another “which came first” question. Which came first, “life or matter.” Again, there is a difference of opinion. It all flows from your world view. Evolutionists believe that the matter of the universe came first. Then, life evolved from all the stuff in the universe. Big questions linger here. How did the matter of the universe get here in the first place? How did life spontaneously begin? With all of our research and devoted effort, we have never been able to form life out of non-life.

However, the Christian view is entirely opposite. Life came first. John 1:4, “In Him was life.” Life was in God. He spoke the universe into existence and then infused life into our planet. The big questions aren’t quite a problem with this view. We don’t have a problem with the origin of the universe or of life–it all began with God. The big question concerns God: how did He begin? Perhaps we’ll know in eternity.

A similar cartoon is found in Ken Ham’s excellent book, “The Lie: Evolution” (Master Books: El Cajon, 1988), p. 160.  For more cartoons like this you can visit Answers in Genesis.

Genesis 6:5 says, “Then the LORD saw that the wickedness of man was great on the earth, and that every intent of the thoughts of his heart was only evil continually.”

It’s no wonder that “the LORD was sorry that He had made man on the earth, and He was grieved in his heart” (Genesis 6:6).  It comes with utter amazement, then, that God would come and save any of us. John Newton described it well, …

Amazing grace, how sweet the sound
That saved a wretch like me.