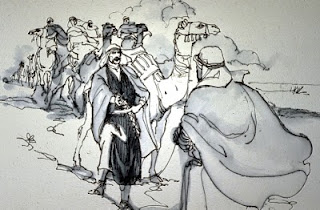 One of the most difficult portions of Scripture to understand is Jephthah’s vow, found in Judges 11. Israel was in danger of the Ammonites attacking. So, Jephthah vowed to the LORD, “If You will indeed give the sons of Ammon into my hand, then it shall be that whatever comes out of the doors of my house to meet me when I return in peace from the sons of Ammon, it shall be the LORD’s, and I will offer it up as a burnt offering” (Judges 11:30-31). It was an earnest plea to the LORD for help in battle. The tragic consequences came when Jephthah was victorious and his daughter was the first to come and greet him. There is much debate about what took place next, as the Biblical language isn’t so clear. But, I believe that Jephthah sacrificed his daughter (which is in total harmony with all of the bizarre things that take place during the days of the judges).

I have heard much about Jephthah’s vow, but I have never heard anything about Jacob’s vow. It was equally as foolish. After serving Laban for 14 years and facing his deceitful treatment, Jacob decided to leave with all of his wives (two of which were Laban’s daughters) and children. When Laban found out about it, he pursued the caravan, overtaking it seven days later. Among other things, Laban accused Jacob of stealing his gods. Jacob protested at this accusation and foolishly vowed, “The one with whom you find your gods shall not live” (Genesis 31:32).

Unknown to Jacob, Rachel (his favorite wife), had stolen the gods. It was only God’s grace that prevented Laban from finding these gods as he searched through all of their belongings. But, had Laban found them, I’m sure that we would have heard much about Jacob’s tragic vow.