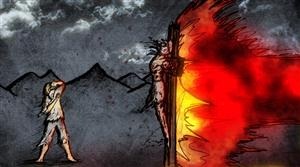 Propitiation is a great word that’s used in the Bible in a handful of cases. However, because we don’t use it very often in our regular conversation, the glories of its meaning for us who believe in Christ is often lost on us. Thus, an illustration of the meaning of the word might be helpful to you.

Propitiation is the subsiding of wrath. Where once there was anger, propitiation brings peace. For instance, when King Ahasuerus found out that Haman had conspired to destroy all of the Jews in Persia, his anger burned against Haman. “And so they hanged Haman on the gallows, … and the king’s anger subsided” (Esther 7:10). It took the death of Haman to satisfy the anger of the king.

Regarding God’s anger toward us for our sin, it took the death of God’s Son, Jesus, to do satisfy His wrath.  He is now at peace with those who trust in Jesus Christ, who “is the propitiation for our sins” (1 John 2:2).