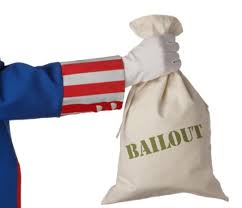 In 2008 the world faced a financial crisis. Stocks all over the world took a downturn not seen since the Great Depression in the 1930s. In the United States financial institutions and the automotive industry were in crisis. For right or wrong, the United States government bailed out these industries with billions of dollars.

Were the truth to be known, our sin has brought our lives into real crisis. We need help. We need a bailout. Unfortunately, no government can help us. We owe a spiritual debt that we can never pay. But God can. He can bail us out.

Jesus Christ died upon the cross to bail us out of our sin debt, if we but believe. Jesus “canceled the record of debt that stood against us with its legal demands. This he set aside, nailing it to the cross” (Colossians 2:14).

I remember a pastor making an interesting observation of parents dealing with their children. He said that when teaching discipline to their children, parents often teach arithmetic. By this, he meant that often, parents employ a method of counting to inform their children of upcoming discipline. A father tells his child to come. When the child is disobedient, the father begins counting, “1 …. 2 … 3 … 4 … 4½ … 4¾” and surprisingly, the child comes just before the father reaches five. This is because the child knows that number five is where discipline begins. In so doing, parents often teach their children not to obey on the first numbers, but only on the latter numbers.

But the Biblical standard is clear: first time and every time.

Such a standard ought to cause us parents to take great care in the things that we tell our children to do. We must be reasonable in our instructions to them, expecting them to obey everything we say. We must smother them in love, so that they know that we aren’t merely making our children our slaves.